Display Technologies, Part 4: Gorilla Arm and how some companies are ignoring it 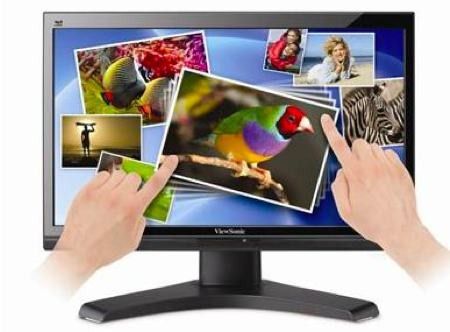 In general use computing, this position is just uncomfortable.

In late October, Viewsonic, the manufacturer of many desktop displays that are highly rated, announced that they would start shipping a multitouch-enabled display. The announcement came close on the heels of the announcement by Apple that they would not be creating a Mac with a touch display due to a possible side effect of use, called Gorilla Arm. Wired.com wrote an article and quoted Steve Jobs as saying, “We’ve done tons of user testing on this and it turns out it doesn’t work. Touch surfaces don’t want to be vertical. It gives great demo, but after a short period of time you start to fatigue, and after an extended period of time, your arm wants to fall off.” In short, that is exactly what gorilla arm entails. So although touch screens can work in a number of different configurations and positions, Apple and others are aware of the problems and avoiding them to the consumer’s health and others seem to simply be ignoring them.

Sadly, Viewsonic is not the only manufacturer in the technology business that is ignoring the side effects of prolonged vertical use of touch screens. HP has been making desktop touch computers for years, making it obvious just who Apple was gunning for at their mid-October press conference. HP’s TouchSmart line of PCs runs a layer of software on top of the Windows operating system to make it simpler to use with a finger (or fingers) as the input device. They have also created the ability to change the orientation slightly in use, simply sliding the computer forward in order to make it more ergonomically enjoyable. Within the HP introductory video to touch input, there is a woman creating a collage of pictures on a computer. She is standing at a desk and never has to extend her arm farther than a few inches in front of her. Is this how people use their computers on a day to day basis? Or does HP have the idea in their heads that the TouchSmart PCs are merely companion computers to a person’s main machine?

Gorilla Arm Syndrome is a term engineers coined about 30 years ago to describe what happens when people try to use these interfaces for an extended period of time. It’s the touchscreen equivalent of carpal-tunnel syndrome. According to the New Hacker’s Dictionary, ‘the arm begins to feel sore, cramped and oversized — the operator looks like a gorilla while using the touchscreen and feels like one afterwards.’

HP might have the idea that their computer will not be used as a “normal use” machine, but Viewsonic is not under any assumptions as to how their desktop monitor will be used. As such, the possibility of Gorilla Arm becoming more of a problem is growing, as others ignore the signs of trouble. Apple on the other hand will, for the time being, stick with touch-enabled slate devices (iPad, iPhone, iPod Touch) and its touch-enabled trackpads on its notebook and desktop computers. With the release of Lion and subsequent Mac operating systems thereafter, the world may be given a deeper look into how Apple plans to handle this without compromising the user’s health.