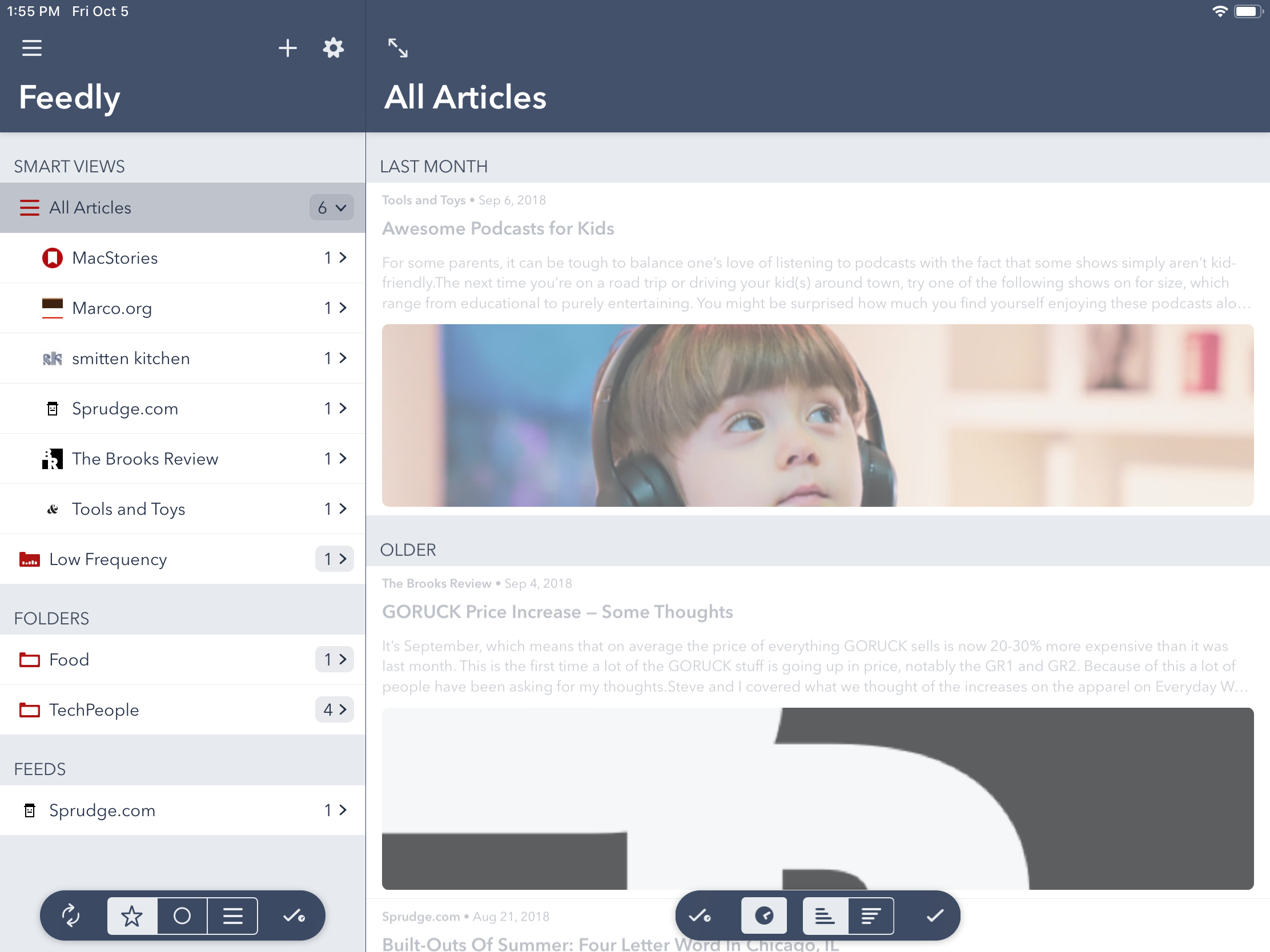 Of course, clean slate is a misrepresentation. I have a history with technology, having been in the business for over a decade and having been using technology in one form or another since my childhood. And since technology is the way I have chosen to get my news since high school, I started out with more of a return to form; I went back to RSS as a means of keeping up on current events.

Using a sync service, in my case Feedly (because apparently there is only one real option for local RSS reading with iCloud sync and no thanks), I jumped back in with an old OPML file full of tech, food, and coffee blogs. Next, I started looking for a feed reader that syncs with Feedly (they all do) that was not the first-party Feedly client.

Side note: first-party clients are not always bad. Third-party clients, however, need to work to make a reason for their existence. There is a reason why the existence of any third-party Twitter clients scares Twitter; their priorities are different and, for that reason, they are just plain better. Third-party clients are able to focus on making their customer—the consumer—happy with a focus on the features that make for a better app, while first-party clients, especially for free services, focus instead on making their customer—ad agencies—happy with greased wheels between their products and the end-user. 🤢

All in all, I tried a couple different clients out and quickly found Fiery Feeds, an app that mirrors a long time favorite of mine on macOS, Readkit. I see the similarities in a variety of ways not limited to its focus on an intuitive, well-designed interface and its ability to act as a reader for many read-later services as well. Fiery Feeds is well maintained, has both iPad and iPhone apps that just work and has a low-cost subscription-based business model that will allow the developer to continue to work on it hopefully for years to come. (If all of this sounds familiar to you, it should; the best apps in the App Store have basically the same modus operandi, including Drafts, Overcast, etc.)

All this to say, RSS is still an open platform that anyone can build on top of and use, which is definitely something that I have chosen to prioritize in my move away from proprietary technologies, especially in the social media and news aggregation spaces. It works and it will continue to work even if any/all of the above commentary is rendered obsolete in a matter of years.

In a separate commentary, I will need to discuss the current landscape of read-later services and why I am displeased with that as well, but I thought I would try to stay focused on RSS this time around. However, whether I am talking about RSS or read-later services, the following stands: if only someone would figure out how to make an app that looks nice, works just as well as Fiery Feeds in every other way, and syncs via iCloud instead of a third-party service, we’d be golden.