I still have obsessive tendencies toward these types of engineering breakthroughs… 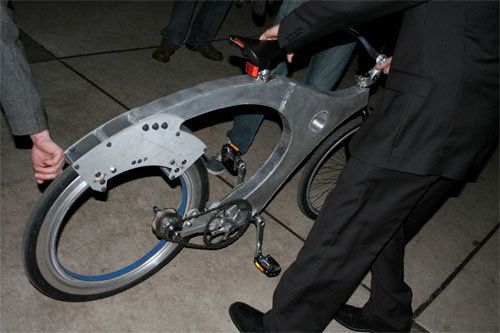 Only the back wheel is spokeless, but that’s just because they only had a limited amount of time and money to build this. It would be pretty simple to do what they did to the back wheel to the front wheel. As for how it works:

It’s a single speed setup. We used two cranks and two bottom brackets in the front to gear up the ratio. It goes from (IIRC) 53 to a 13, which is connected to the second crank and another 53 which connects to the rear hub. The rear hub is just a normal ratcheting rear hub that we mated to our belt pulley. Not sure if all these bike terms are right, but that’s the general idea.

The front wheel would be almost exactly the same as the rear wheel except that it could be a little lighter. Some of the aluminum can be shaved off since there’s no powertrain to connect to.